USA Today– Before he was suspended indefinitely by the NFL for failing multiple drug tests, Josh Gordon was a wide receiver at Baylor.

Gordon detailed in an interview with The Uninterrupted released Tuesday how one of his coaches helped him avoid positive tests while in college.

“I’ve been enabled most of my life honestly,” Gordon said in the video documentary. “I’ve been enabled by coaches, teachers, professors, everybody pretty much gave me a second chance just because of my ability. Not too long after I got arrested for possession of marijuana at Baylor, one of my coaches came by saying ‘you are going to get drug tested by the compliance office. This is how it’s going to work, this is what they are going to do. If they do call you in, here goes these bottles of detox.’ 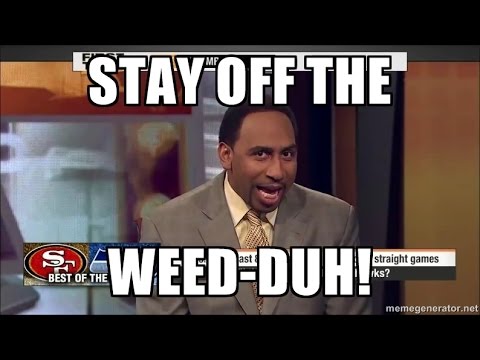 So we all know Josh Gordon has been breaking the Stephen A. Smith Golden Rule for a long time now. The WEED-DUH has basically ruined Josh Gordon’s NFL future, and it turns out he learned a lot of his tricks in his college days.

Gordon was already starting to run into trouble with the law due to his affinity for the pot during his college days. Luckily for Josh, he went to an upstanding university like Baylor where the football coaches decided rather than teach Josh a lesson, they would teach him how to cheat the system. When your college coaches give you pills and drinks that detox you days before a drug test you start to think that you can do whatever you want and get away with it so I kind of feel bad for Josh.

Now let’s be honest with each other. We’re all adults. We’ve all tried a weed or two in our lives, but when you are being paid millions of dollars to play football I don’t get how you can just nottt smoke weed for a few years. If it were up to me, (which I think it should be) weed would be legalized and Josh Gordon would be ripping blunts on the sideline like Jay Cutler with his heaters. But unfortunately that’s not how Roger Goodell feels. So, maybe Josh could’ve just stayed off the weed-duh for a little while and made a few more million dollars, but to each their own.